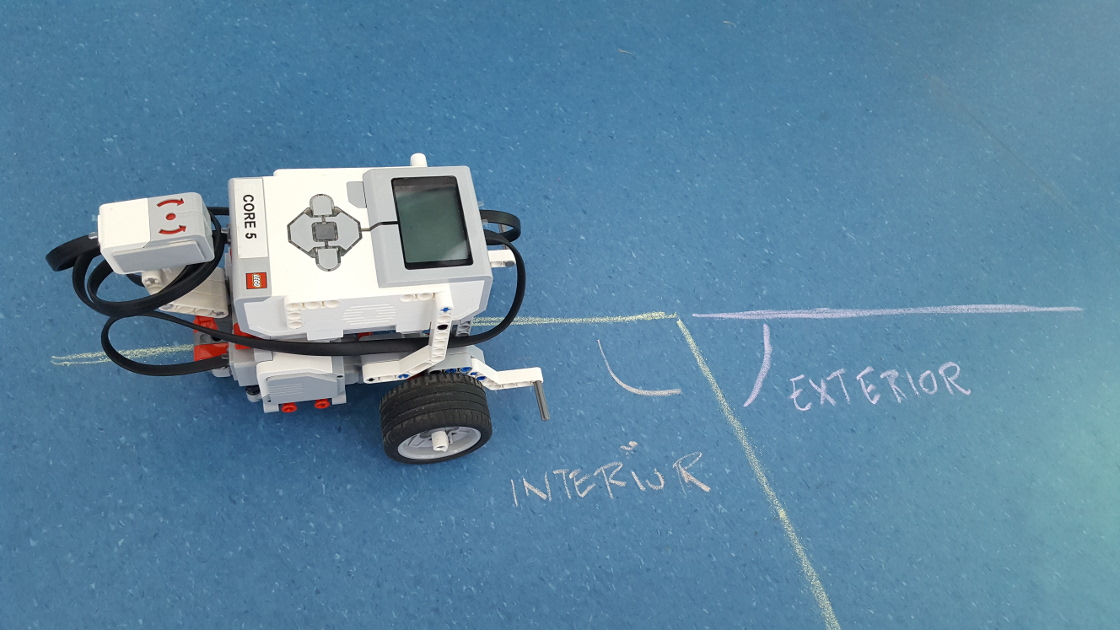 We’re using the Robot Educator Model, equipped with the Gyro Sensor to progressively understand this concepts and build a fully functional model that can track any regular polygon taking the number of sides as an input.

At the end of this lesson, our students will have a solid knowledge of:

Regular polygons are polygons on which all angles are equal in measure and all sides have the same length, such as triangles, squares, pentagons, hexagons and so forth.

Let’s first make sure that the students are familiar with these polygons by making them fill a table like shown in the screenshot below. Ignore the exterior angle column for now; we’ll deal with in the next task. 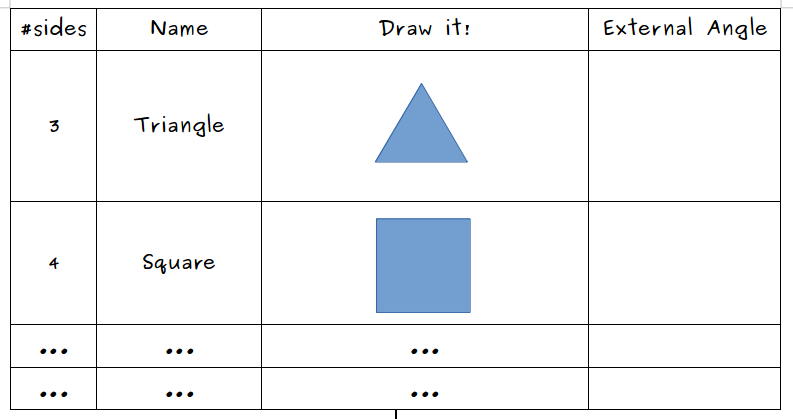 For your convenience you can download the table in LibreOffice format

Once the students have completed the table with the polygons from the triangle to the hexagon it’s time to move onto the exterior angle.

As per this (somewhat obscure) definition,

The Exterior Angle is the angle between any side of a shape, and a line extended from the next side.

Let’s shed some light on this by taking a look at the diagram below, where we can see that the interior angle is part of arc filled in blue, whereas the exterior angle is the one filled in white: 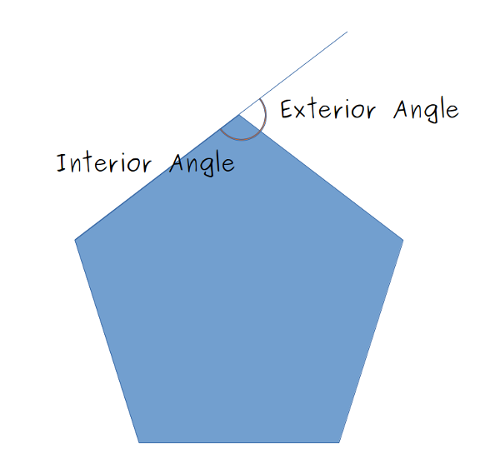 Before moving forward, let’s pause for a second and make a few experiments involving these angles:

Therefore, the exterior angle for a regular polygon can be calculated as:

Now that we know how to calculate it, go back to table on the previous task and fill in the exterior (or external) angle for the polygons, before moving into coding.

Based on all the facts that we’ve collected about interior and exterior angles in a polygon it should be fairly simple to come up with a similar formula for calculating a regular polygon’s interior angle.

Now that we know what’s the value of the exterior angle for a polygon let’s program our Robot Educator for tracking the shape of a triangle and an hexagon using the gyro sensor.

Here’s the program for the triangle:

And for the hexagon:

Both programs are almost identical and repeat in an endless loop:

Keep in mind that the gyro sensor reading lags a little bit, hence the robot will turn a few extra degrees on each corner. A proper way to compensate this lag is outside the scope of this lesson, for now we’re minimizing the impact by turning real slow (power 5).

This program is the basic flow we’ll reuse in the following tasks.

Did you notice the sole sole difference between the previous two programs?

The value of the exterior angle.

Let’s reuse the basic flow by calculating the exterior angle given the number of corners in the polygon as shown on the program below:

In this program we’re:

Now that we know how to compute the exterior angle, let’s make our program a little bit more flexible by using variables.

In the previous task we used a constant for specifying the number of corners in the polygon. This time we’re going to use a variable for storing it.

For debugging purposes and in order to simplify the flow we’ll use a secondary program to display the value of the variable on screen throughout the main program execution.

Now that we have a variable holding the number of corners, it’s time to allow the user to input it’s value:

In this program we’re:

One of the questions that usually pops up is: why are we adding all this complexity to the program when we could perfectly live with hardcoding the value in the constant?

We can answer that question with another question: Let’s say you programmed your Robot Educator for tracking a square. How would you track an hexagon if you didn’t have your programming environment handy? By making the program runtime configurable we give it more flexibility, at the expense of simplicity.

The minimum number of corners in a polygon is 3. Can you modify the program so that the variable can’t be set below this minimum value?

Our program is almost complete now, but you’d probably noticed that once we provide the number of corners, the program will run forever tracking the specified polygon. This is nice, but we’d rather track one full polygon and then prompt the user again for providing a new number of corners.

This can be achieved by wiring the corners variable to the exit condition on the basic flow, and wrapping the previous program in an endless loop, as displayed on:

In this lesson we learned how to build a somewhat complex program with user input and some maths that helped us better understanding some interesting facts about regular polygons.

Stay tuned for more lessons and remember to check my company’s site Tesla Cool Lab for further info and resources.

LEGO® and MINDSTORMS® are trademarks of the LEGO Group of companies which does not sponsor, authorize or endorse this site